Abstract. Nootropyl (Piracetam) a drug reported to facilitate learning in animals was tested for its effect on man by administering it to normal volunteers. The subjects were given 3×4 capsules al 400 mg per day, in a double blind study. Each subject learned series of words presented as stimuli upon a memory drum. No effects were observed after 7 days but after 14 days verbal learning had significantly increased.

in the treatment of senile dementia and other degenerative disorders (Stegnick, 1972) suggests that learning and memory improve. The question arises as to whether it is possible to improve different parts of the mental makeup of normal man by the use of drugs, of this kind where the explanation cannot be given that the effect of the drug is merely to hold pathology at bay, but is to be sought in the action of the substance in a direct way upon the brain. We began an investigation therefore to study the effects of this drug on learning and memory in normal man.

Guirgea (1971, 1973) developed the idea that changes can be induced in the higher mechanisms of the brain by chemical substances and that something other than change at the molecular level may be involved. He proposes a new class of drugs, the Nootropic drugs (Noos = mind; tropein = towards), compounds presumed to have their action upon telencephalic plasticity and upon the integrative action of the brain. He came to these ideas of nootropic action through the study of Piracetam UCB 6215 (2-pyrrolidone acetamide) a substance which appears to work upon the cerebral cortex and related telencephalic structures.

This drug has been used in the study of learning in man. In an investigation on a population of chronic alcoholics (Weckroth and Mikkonen, 1972) it was concluded that an improvement takes place in the coordination of the individual’s behaviour. Research

The daily dosage was 3×4 capsules at 400 mg Piracetam or 3×4 placebo capsules of the same appearance and taste. The total duration of the administration was 14 days.

The study was made up of three sessions. The first was a pre-test before the drug had been administered, used both for matching the subjects and to act as a base level for further performance. There were two other tests, the first a week after commencement of drug administration, and the second 2 weeks after this time.

The procedure was to match every subject with another subject on the basis of the minimal distance in a seven-dimensional space comprised of the individual experiments which made up the totality of the study and of which we report here only a few. These were a verbal memory task, a dichotic listening task, a pursuit rotor task, an intermanual transfer task; and in addition the level of handedness performance as measured by a Handedness Questionnaire; and additional still, the subject’s age and sex.

One of the matched pair at random was then given the drug, and the over the placebo. The study was a double-blind and neither the subject nor the experimenter had the knowledge as to which subjects were taking drug and which placebo.

Each subject learned a series of words presented as stimuli upon a memory drum. The series consisted of nine two-syllabic words of six or seven letters each. All were singular nouns and had a word frequency of between 500 and 100 as indicated by a word frequency count (Carrol et al., 1971). The words were presented for 2 s each. After the last word the subject was required to wait for 10 s after which is was required that he write his response directly or perform a counting task for 40 s which prevented rehearsal (Peterson and Peterson, 1959). This was counting backwards in steps of three starting from a given number. The subjects saw six lists of nine words during each session. Three of these were recalled directly and three after delay: Each subject received the total eighteen lists in an order varied systematically according to a latin square design.

Two scores were computed from the data. The first the ‘normal score’ was obtained by straight forward counting of the number of words correct. The second —‘the association score’ is taken as the number of successive pairs of words correctly recalled regardless of absolute serial position (Waugh, 1963). A pooled correlation between the normal score and the association score revealed a value only of r = 0.67. We ignored the association score therefore and report here the results of the ‘normal score’ (Table 1). These were presented in a standardized form and the scores used as data in an Analysis of Variance (split-plot design) (Kirk, 1968). The factors examined were those of drug versus control, performance over the three sessions, the delayed, direct recall condition and the replication.

As a contrast to the facilitation of verbal memory which we report here, the results of a non-verbal learning task, the pursuit rotor, in which the individual is required to follow a moving target with a stylus, showed no significant difference between the drug 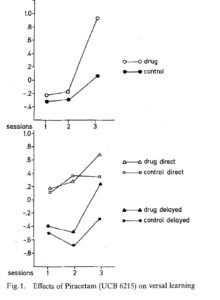 and the control groups. The interaction session x drug/ control was non-significant (F = 1.486, df = 1,192). Interactions of sessions x drug/control on a multiple affect adjective list administered to test for changes of mood, were also non-significant. Tests performed to determine whether the individual himself was aware that he was on the drug proved negative.

tensive research effort may be necessary before the exact mode of its actions can be determined. At present the point to be emphasized is not the mode of its action but that it acts at all. The fact is that the ad-minstration of Piracetam promotes verbal learning and in this it would appear to be a substance which in a specific respect is capable of extending the intellectual functions of man. It therefore represents a forerunner of a class of drugs which could act to lead him to learn or to remember better, and thus the effect is in the actual enhancement of performance. The point has been stressed that the subjects of this investigation were essentially normal healthy college undergraduates. Investigations of the past illustrating enhancement of mental function in man have almost invariably done so in individuals exhibiting a pathological condition. Where normals previously have been studied, for example in the administration of Levadopa (Loranger et al., 1972) no significant effect has been reported. Increase in alertness and enhanced mental ability could be attributed in such cases to the effect of the drug in counteracting the pathology, or acting against the pathology in such a way that the mental processes were enhanced. Such an explanation cannot be proposed here for our results because our subjects were not senile, suffering from generalized brain disorder, confusional states, or any other pathology of the brain. The effect therefore is essentially of enhancement of the mnemonic power of the brain by the action of the drug upon the brain processes themselves rather than its action in holding some pathology known or unspecified at bay. Although we have no IQ data on our subjects, by virtue of the selection procedure through which they pass to become students they are all almost certainly individuals scoring in the upper intelligence ranges, and all almost certainly gifted with facility in verbal memory. It is therefore possible to extend the power which they possess to still higher levels despite the fact that the range of their achievement is already high.

It is clear from these results that the effect of this is something which is not observed as a generalized phenomenon over the span of what the brain can do. Whilst on tests of verbal learning there is clear evidence

of enhancement, on the pursuit rotor non-verbal learning test, on the other tests reported here there was not. It would appear therefore that the drug can act specifically and selectively within a realm of mental action, and that its effect need not extend to all areas of the intellect. We do not as yet know the bounds of its influence upon mental action. It may improve a broad spectrum of the intellect or just verbal learning as demonstrated here, but the fact of its action shows that human brain power can be selectively increased, and if this is so within the orbit of verbal memory, then the next step is to seek out substances which selectively improve yet other facets of mental life which go to make up the constellation of human intellect.

Guirgea, C.: The nootropic approach to the pharmacology of the integrative action of the brain. Conditional Reflex 8, 108 — 115(1973)

Weckroth, J., Mikkonen, H.: On the effect of UCB 6215 on certain intellectual, perceptual and psychomotor performance traits and traits of subjectively rated mental state. Communication of the 30th Int. Congress on Alcoholism and Drug Dependence, Sept. 1972, Amsterdam, The Netherlands

Visiting fellow from Rijksuniversiteir te Leiden supported by the European programme for training in brain and behaviour research.