An N-side chain modified derivative, aniracetam has low bioavailability in plasma and is eliminated rapidly in animals[102] (table III, figure 1). Considering issues in treating elderly people with renal dysfunction, its pharmacokinetics and the fate of metabolites were evaluated in six women (mean age 84.5 years) with cerebrovascular disease. The half-life of its major metabolites (anisic acid, />-methoxyhippuric acid, 2-pyrrolidone and succinimide) increased 4- to 7-fold compared with those in young healthy volunteers (0.79-1.58 hours). No adverse effects were noted.[18] It improved psychometric parameters up to 30% in aged MCI patients compared with placebo, with mild AEs apparently unrelated to aniracetam3103] In another small trial involving elderly patients with slight to moderate vascular cerebral pathologies, it was reportedly useful3104] However, aniracetam was not efficacious in people with memory/cognitive impairments associated with chronic exposure to hazardous organic solvents3105]

A phenyl derivative of piracetam, phenotropil or phenotropyl is absorbed fast and exhibits high oral bioavailability (Phenotropil®, product insert). Studies on rodents (lOOmg/kg, intramuscular, oral) showed absorption time of <1 hour and half-life of 2.5-3 hours,[19’20] but its pharmacokinetic profiles in humans are unpublished. It

demonstrates multitherapeutic potential, some in common with subgroup 2 AEDs.

Phenylpiracetam is reportedly beneficial to people who develop cognitive deficits and/or depression after encephalopathy and brain injures (table Y). It increased quality of life in patients with encephalopathy after acute lesions (30 people), brain traumas (33 people) and gliomas surgery (36 people). The average minimental state examination (MMSE) scores (a standard 30-point questionnaire used to assess cognition) from baseline improved in all groups. In the end, anxiety improved and depression declined substantially, and that resulted in less discomfort and better ability to execute everyday activities.[85] Recovery of memory, attention and sensomotor disturbances were indistinguishable for similar treatments in mild cranial brain traumas. The differences noted favoured phenylpiracetam over piracetam because of faster alleviation of headaches and a general fatigue after 7 and 14 days.[86] Phenylpiracetam was favoured in the treatment of chronic vascular encephalopathy as it improved the cognitive performance in all (400 mg/day) in combination with multivitamins and physiotherapy/90] It is unclear whether any particular patient(s) was unresponsive to or relapsed after therapy. 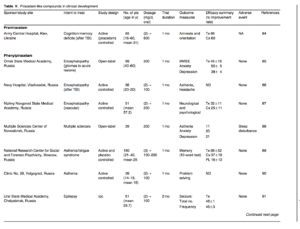 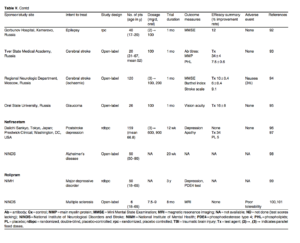 Phenylpiracetam exhibited an antiepileptic action in rodents. Its effective dose (300mg/kg) decreased the metrazol (a drug used as a circulatory and respiratory stimulant)-induced seizure by 50%/1O6] Phenylpiracetam was administered to patients in addition to one standard AED (including valproyl amide, carbamazepine, la-motrigine, topiramate or a barbiturate, or structured polytherapy with more than one of these drugs). It substantially mitigated the number and frequency of seizures of patients receiving AED only and the number of individuals with a de-synchronous EEG profile decreased from eight to three, while the number of individuals with seizure remissions increased modestly/91] Consistent with this, cognitive functions in epileptic patients based on an MMSE test improved to only a small extent/92] These trials favoured phenylpiracetam as add-on medication for epilepsy (table V).

Because the immune system has a crucial role in the pathogenesis of ischaemia-stroke, titres of antibodies against the main myelin protein and phospholipids were measured in patients with acute cerebral stroke treated with phenylpiracetam. The titres of both antibodies decreased, suggesting possible reduction of ongoing demye-lination[93] (table V). In a two-arm parallel trial with patients receiving one tablet (80 people) and two tablets (40 people) a day, both MMSE and severity of stroke scores improved significantly, while only showing a trend toward improvement in daily living activities (Barthel test)/94] A post hoc analysis for a subset of these data might be useful, but overall the therapy appears modestly beneficial (table V).

The cause of blindness in glaucoma is optical neuropathy and ganglia cell apoptosis. Use of a neuroprotective agent in delaying or preventing ganglial cell death was the rationale of a recent trial. Phenylpiracetam was given to patients with unstable open-angle glaucomas after the eye pressures were normalized using ocular hypotensive therapy and laser trabeculoplasty. The average number of blind spots or islands of loss or impairment of visual acuity decreased, and glaucoma stabilized in 80% of patients at 6-month follow-up[95] (table Y). It is premature to conclude whether the trial favours phenylpiracetam because of the lack of a prospective placebo control and possible variables such as patient heterogeneity at the trial entry point.

This subgroup is discussed briefly in the following sections because of their approved and purported activities as AEDs. These drugs have been reviewed recently by others (e.g. Bialer et al.,[107] Rogawski[108] and Pollard[109]) and will be topics of reviews in the future.

Levetiracetam is a second-generation homo-logue of piracetam with an a-ethyl side-chain substitution that has a favourable pharmacokinetic and safety profile/1101 and is the only approved drug in this subgroup (table III, figure 1). Other recent reviews have called into question the safety of levetiracetam because of its potential adverse effects on bone strength and formation/1111 as well as behaviour or mood/1121 However, it improved memory and cognitive functions in patients with refractory partial seizures^1131 and language dysfunctions in children with benign sporadic seizures/1141 in a small controlled trial and an open-label study, respectively. A retrospective analysis[1151 and non-controlled trials in both non-epileptk/1161 and epileptic^171 patients with anxiety and/or depression suggested that levetiracetam is effective to some extent. These results could suggest that levetiracetam is a pluripotent compound, which means it is stimulatory to certain behaviours and inhibitory to other functions. However, its beneficial effect (as a monotherapy) for other indications such as autism is controversial.