BPC 157 is a peptide sequence found within a protein in the gastric juices of humans that helps the body activate its innate healing processes. BPC 157 is a 15 chain amino acid fragment that is derived from the larger BPC protein that is found in humans. Researchers found that “this fragment retained practically all effects of the natural BPC protein” and was “most responsible for the biological activity of the entire protein.”

All of the BPC 157 you see sold elsewhere is either in the free form or acetate form. The problem with these forms of BPC and many other peptides is that they are not stable at high temperatures such as those found in the body and are especially unstable in the high pH environment of the stomach. They can also be destroyed by UV light.

To counter these shortcomings the original developer and patent holders of BPC 157 made a form known as BPC 157 Stable Version which is BPC reacted with the amino acid L-arginine to form a salt. This salt form, BPC 157 Stable Version, is stable for longer at higher temperatures and in higher pH levels. It is also stable in UV light.

The patent for BPC 157 was approved in 2017 and Nootroo is now the exclusive USA and Canada distributor of BPC 157 Stable, directly from the inventors or BPC and patent holder, Diagen.

We will share some excerpts from the patent below, including proof of stability in various environments and the demonstrated superiority of the salt form vs the traditional acetate. 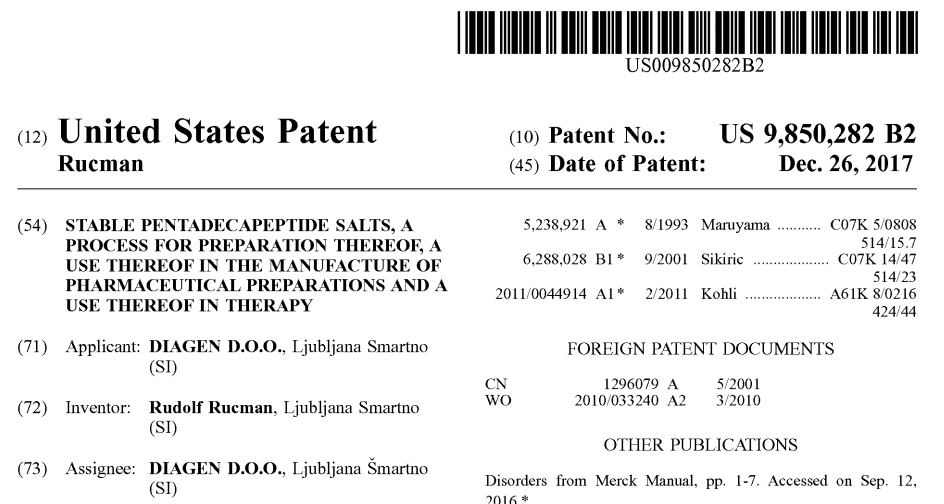 Compounds of such type are very susceptible to ultraviolet light. An aqueous solution of Arg-BPC (1 g/100 ml of water) at 20° C. was radiated with ultraviolet light of a wavelength of 253.7 nm and absorption was measured within wavelength range from 230 to 350 nm over a period of 70 min every 10 min. The results are represented in FIG. 1 and confirm that the compound is stable.

Gastric juice is a complex mixture of different compounds and the main components are: water, sodium chloride, hydrochloric acid, mucins, enzymes, particularly pepsin, and others. Gastric juice is mainly acidic; its pH value varies from 1 to 7 and exceptionally higher. Normal pH values are in the range from 2 to 5, which is also the range of the greatest activity of pepsin which decomposes polypeptides, peptides and proteins.

Stability of a compound in gastric juice is an important parameter, particularly in peptides, which very rapidly decompose in the presence of pepsine enzyme and in an acidic medium. Better stability in gastric juice means a longer period, in which the compound is available for resorption and its therapeutical activity.

The results of stability determination show that bepecin salts with basic amino acids are substantially more stable than other hitherto known salts of pentadecapeptide in question, which is surprisingly a huge advantage.

A consequence of better stability is also better biological activity, since the intact compound is present in an organism for a longer period of time and available for more efficient resorption. 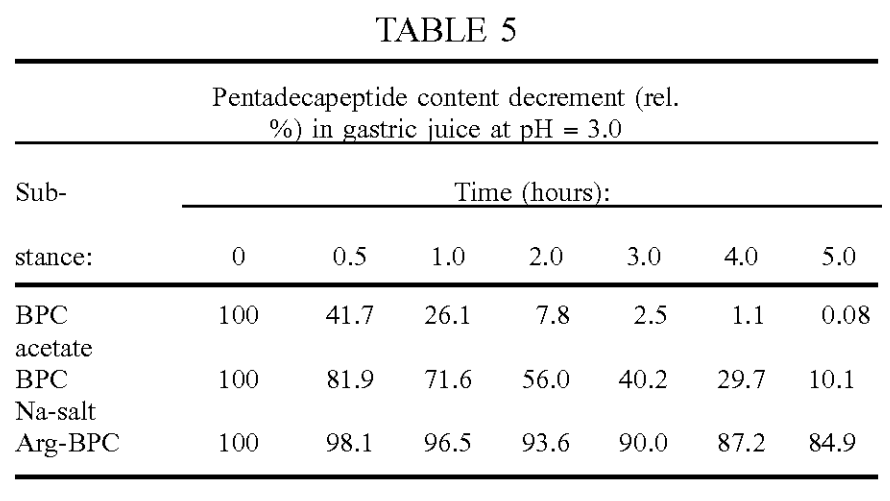 The patent for BPC 157 was approved in 2017 and Nootroo is now the exclusive USA and Canada distributor of BPC 157 Stable, directly from the inventors or BPC and patent holder, Diagen.

We will share some excerpts from the patent below, including proof of stability in various environments and the demonstrated superiority of the salt form vs the traditional acetate. 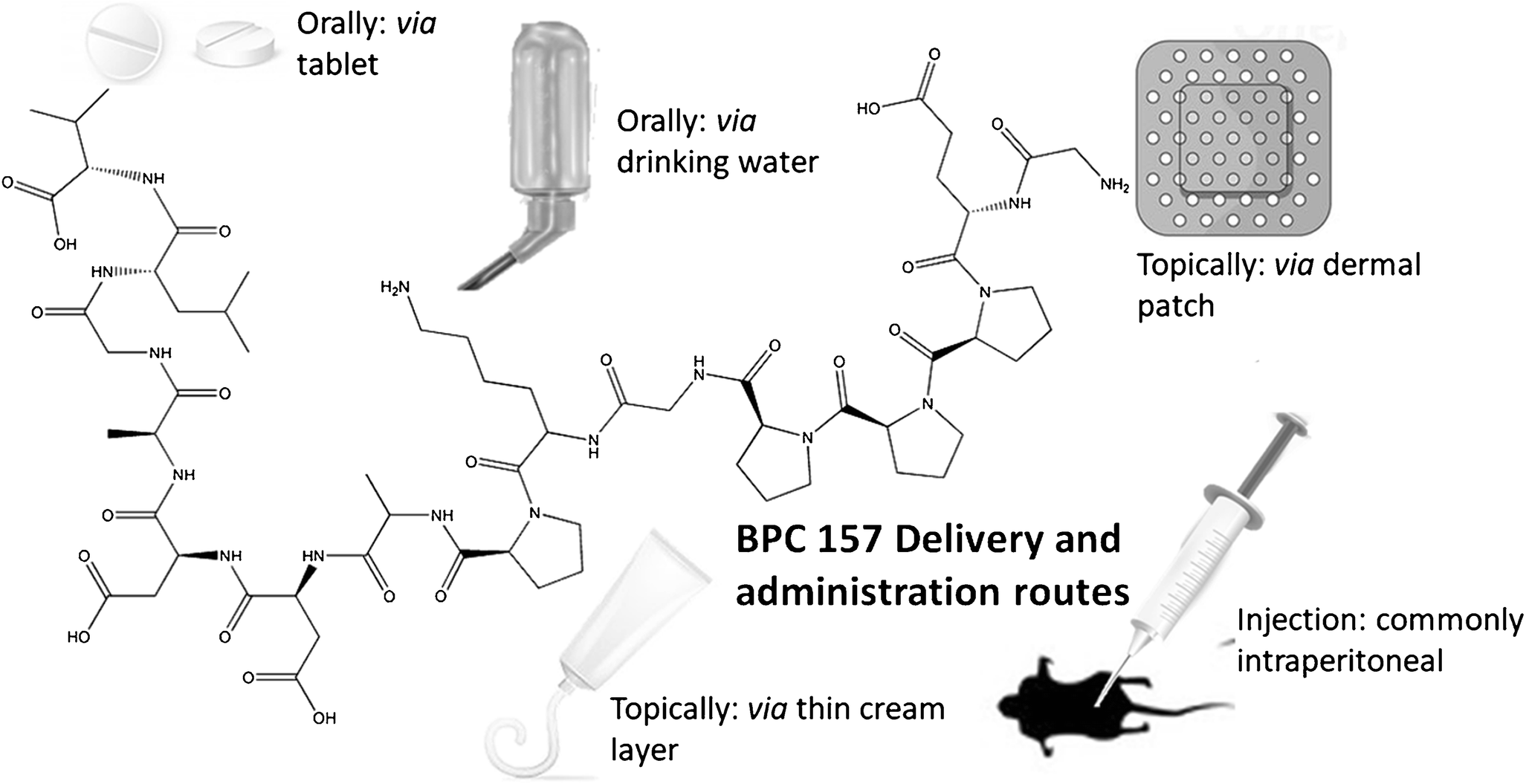 Body Protect Compound 157 (BPC 157) is a peptide sequence found in the gut lining of humans that is utilized by the body to protect from stress and help activate the healing processes.

Nootroo is now the exclusive USA distributor of the stable form (and non-stable) form of BPC 157 manufactured by the patent holder, Diagen. It is also known as Stable Body Protective Compound 157.

Is BPC 157 Stable Version real?  Yes, it’s real and it’s spectacular. We are aware that many people may try and challenge this because they are unaware of it. But Diagen is also the patent hold and originator of standard BPC. In their words, BPC 157 Stable, makes BPC 157 obsolete. They are no longer even doing research on the unstable BPC 157 going forward.

Most of the research we can share as of now on Stable BPC 157 will come from that patent which is publicly available, while other information is internal data shared directly with Nootroo by Diagen that we are working to make available publicly. The research on non-stable BPC 157 generally does apply to BPC 157 Stable, however, BPC 157 is considered much more stable in the body and as such, research related to the”dose” sizes should be lowered somewhat. Much of the research on BPC-157 below is for the non-stable BPC 157 version and will be noted when and where it is the BPC 157 Stable.

BPC 157 is also not being sold by Nootroo for use in humans, and is purely for research purposes. We make no claims, and nothing we say has been evaluated or approved by the FDA. We will cite various studies demonstrating the current research data on BPC 157.

How is BPC Stable different than the original compound?

Normally BPC is in its peptide form, made up of a single chain of 15 amino acids.  Peptides are easily destroyed by high temperatures, exposure to sunlight etc. BPC 157 Stable Version has been reformulated to protect that compound by creating a “salt” form that mixes it with other amino acids that make the compound more stable. A demonstration of those properties can be seen in its ability to withstand ultraviolet light:

FIG. 1 Illustration of stability of a bepecin solution when irradiated by ultraviolet light; absorptions of samples 1 to 7 were measured each 10 min.

Directly from the Patent:

Compounds of such type are very susceptible to ultraviolet light. An aqueous solution of Arg-BPC (1 g/100 ml of water) at 20° C. was radiated with ultraviolet light of a wavelength of 253.7 nm and absorption was measured within wavelength range from 230 to 350 nm over a period of 70 min every 10 min. The results are represented in FIG. 1 and confirm that the compound is stable.

What do we know about BPC 157 for Healing Tendons?

This was a rare study, where I saw a photo in it that made me say “Whoaaaa!” out loud to myself in my office.

This is a picture of a rat with a fistula (hole from that goes from surface into their colon). The control rats, because of this hole, were basically bypassing their normal digestive system and their feces was coming out through that hole. These holes do not normally close on their own, as the research says “fistulas exhibited very poor healing, without spontaneous healing and fistula closure throughout the 28-day post healing period. The skin defect remained open.”

When BPC was applied on other rats with the fistula, the wound closed itself. The study shows “the fistula healing is considerably improved,” with “closure of both skin and colon defect”. “These results demonstrated the pertinent efficiency of the all of BPC 157 healing effects (colocutaneous fistula, skin wound, and colon wound).”

The scientists found that BPC 157 could heal wounds “speedily and prominently.” Their discussion also notes that ” it could be that the commonly suggested peptide growth factor involvement in the healing of the skin and colon lesion may be practically proved with BPC 157’s application. ”

“Importantly, pentadecapeptide BPC 157’s beneficial effect on both the wound and mucosa healing reduces the number of inflammatory
cells (8, 9, 44) and levels of leukotriene B 4 (LTB 4 ), thromboxane B 2 (TXB 2 ), and myeloperoxidase (MPO) in the serum and inflamed tissues (45, 46). Together, these could significantly affect the afferent nerve function (47).”

“This pentadecapeptide would probably have a similar activity in other organs as well, which is relevant for both the skin and mucosa healing. In support of this, BPC 157 has a strong angiogenic effect (12, 35, 49) [i.e., angiogenesis is an essential component of ulcer healing since it assures delivery of oxygen and nutrients to the healing site (26)]. Likewise, BPC 157 counteracted endothelin over-expression (50). It is notable that a better collagen organization was consistently seen with the use of pentadecapeptide BPC 157 (8 – 14, 34 – 36, 51, 52). This clearly corresponds to prominently stimulated expression of egr-1 gene, which induces cytokine and growth factor generation and early extracellular matrix (collagen) formation, and its repressor nab2 by pentadecapeptide BPC 157 (34).”

“Pentadecapeptide BPC 157, efficient in therapy of the inflammatory bowel disease (PL14736) (15, 16) and intestinal anastomosis healing (13, 14), counteracted the colitis induced by a variety of ulcerogens”

“Thus, it seems likely that other mechanisms should be also implicated in superior BPC 157 efficiency. The effects of BPC 157 in therapy of fistulous conditions overrides the onset, extent, and rate of healing seen with sulphasalazine (this study, however, provided the first demonstration of the effect of sulphasalazine on skin wound healing, although delayed). Also, the effects of BPC 157 are opposite to the aggravation induced by 6- α-methylprednisolone. Furthermore, the corticosteroid systemic administration is known to generally impair the healing and to adversely affect wound healing in various experimental models involving the skin and other tissues (20, 52, 54). In support of this, the incidence of fistulas is highly increased in the corticosteroid- resistant inflammatory bowel disease patients (55). Interestingly, pentadecapeptide BPC 157 counteracted corticosteroid-induced impairment of burn healing (9) and some other types of tissue healing (52). Also, it inhibited corticosteroid-induced immunosuppression (9).”

[1]Pentadecapeptide BPC 157, in Clinical Trials as a Therapy for Inflammatory Bowel Disease

But don’t take my word for it, look at pictures that made me say “Whoa!” 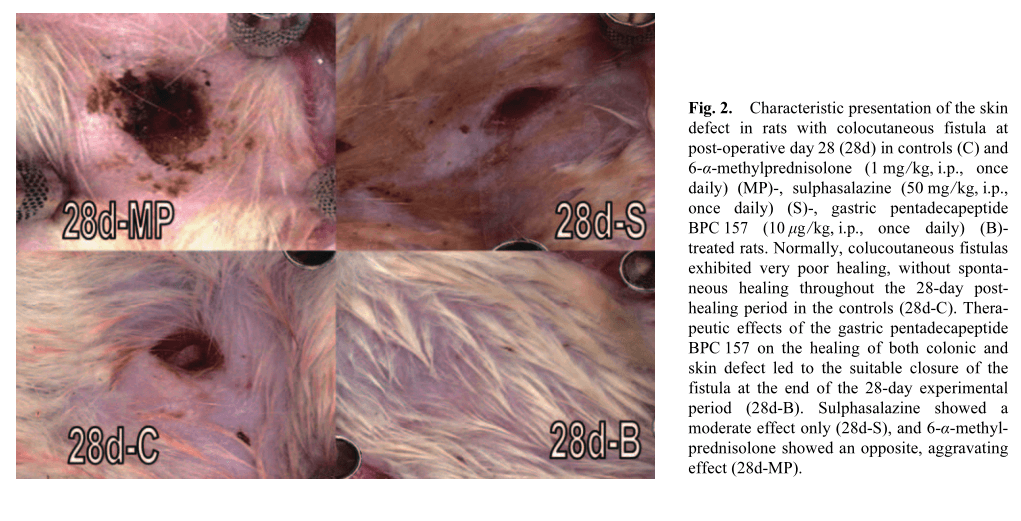 Study of the protective effects of pentadecapeptide BPC 157 on wounds in small type pigs.

“This should be pointed out with respect to the improved healing of colocutaneous fistula, skin, and colon wounds and the suggested use of pentadecapeptide BPC 157 in inflammatory bowel disease therapy; when BPC 157 was used previously, LD1 could be not achieved, limit test
negative, no side effects were found in trials, and no complications were observed (15, 16).” This is excerpted from the fistula study, and sources 15 and 16 are the two below.

What does BPC 157 have to do with Nootroo and Nootropics?

BPC 157 has been shown to reset the dopamine system in the brain to attenuate damage from amphetamines.

“PL 14736, a novel 15 amino acid peptide, has shown benefical activity in experimental models of gastrointestinal damage. Seven-day intracolonic administration of PL 14736 to rats has significantly reduced the extent TNBS-induced colonic damage and hastened healing. These results have encuraged the development of the compound for the treatment of patients with ulcerative colitis. In this first study in man, rectal administration of PL 14736 to healthy male volunteers was safe and well tolerated. Based on these data, a randomized, double-blind, placebo-controlled study was started in order to investigate the tolerability and efficacy of Pl 14736 enemas in patients with acute mild to moderate ulcerative colitis”

While we must make clear and reiterate again that Nootroo is not recommending or selling BPC 157 Stable for use in humans. Nootroo is selling BPC 157 Stable verison for research only. None of the statements on the website have been evaluated by the Food and Drug Administration and are not intended as medical advice. This product is not intended to diagnose, treat, cure, or prevent any disease. Nootroo products may only be purchased by adults aged 18 and older. Further, please note that BPC 157 is not a vitamin, mineral, amino acids, herb or other botanical, or dietary substance for use by man to supplement the diet by increasing the total dietary intake.