Studies in humans have shown that the combination of a nootropic agent with a source of choline has “profound effects on memory enhancement.” Research in this area underlies the theory behind the formulation of Nootroo Gold and Silver, with their combination of a nootropic agent, either Noopept or Phenylpiracetam, and a choline source, CDP-Choline. Researchers had a hunch that age-related declines of memory function had a basis in the cholinergic system of the brain. [1]Bartus, R. T. Cholinergic drug effects on memory and cognition in animals. In: Aging in the 1980’s: Psychological Issues, edited by L. W. Poon. Washington, DC: American Psychological … Continue reading[2] Dracl’anan, D. and J. Leavitt. Human memory and the cholinergic system: A relationship to aging.’ Archs Neurol. 30: 113-121, 1974.[3]Nickolson, V. J. and O. L. Wolthuis. Effect of the acquisition-enhancing drug piracetam on rat cerebral energy metabolism: Comparison with naftidrofuryl and methamphetamine. Biochem. Pharmac. 25: … Continue reading[4]Perry, E. K., B. E. Tomlinson, G. Blessed, K. Bergmann, P. H. Gibson and R. H. Perry. Correlation of cholinergic abnormalities with senile plaques and mental test scores in senile dementia. Br. reed. … Continue reading The cholinergic system uses the neurotransmitter acetylcholine to help increase the strength of signals involved in the encoding of memories and by increasing the brain’s ability to modify synapses. It has been shown that an increase in the availability of choline, which is the precursor for acetylcholine, leads to a direct increase in the levels of acetylcholine in the brain. This increased amount of acetylcholine then enhances cholinergic transmission, resulting in increased memory and other improvements in behavioral performance.[5]Barbeau, A. Lecithin in neurological disorders. New Engl. J. Med. 299: 200-201, 1978.[6]Bartus, R. T., R. L. Dean, J. A. Goas and A. S. Lippa. Age-related changes in passive avoidance retention: Modulation with dietary choline. Science 209: 301-303, 1980.[7] Davis, K. L., L. E. Hollister, J. D. Barchas and P. A. BerBer. Choline in tardive dyskinesia and Huntington’s disease. Life Sci. 19: 1507-1516, 1976. [8] Sitaram, J., H. Weinganner, E. D. Caine and J. C. Gillin. Choline: Selective enhancement of serial learning and encoding of low imagery words in man. Life Sci. 22: 1555–1560, 1978.

While increased amounts of choline worked as hypothesized in young subjects, an increase in memory performance was not taking place in aged brains. This led scientists to hypothesize that older brains may no longer have the ability to incorporate extra amounts of choline into acetylcholine and therefore do not reap the benefits of an improved cholinergic system and increased memory formation .[9] Bartus, R. T. and R. L. Dean. The cholinergic hypothesis of impaired memory in the aged. Nutritional and pharmacological implications. In: Aging, Vol. 18: Nutrition and Aging.[10]Bartus, R. T., R. L. Dean and B. Beer. Memory deficits in aged Cebus monkeys and facilitation with central cholinomimetics. Neurobiol. Aging 1: 145-152, 1980.. For example, it is known that normal cholinergic activity is dependent upon intact oxidative metabolism, which is decreased in the aged central nervous system. It is also known that the conversion of acetylcholine occurs more readily under the conditions of increased neuronal activity in certain cholinergic pathways, which has also been shown to be reduced in aged subjects.[11]Sherman, K. A., J. E. Kuster, R. L. Dean, R. T. Bartus and E. Friedman. Presynaptic cholinergic mechanisms in brain of aged rats With memory impairments. Neurobiol. Aging 2: 99-104, 1981.

So, the scientists decided to run an experiment to see if they used a substance that restored the brain’s age-related neuronal deficiencies while administering abundant choline, it would allow the brain to reap the benefits of choline supplementation. Piracetam had been shown to improve memory in both animals and humans [12]Friedman, E., K. A. Sherman, S. H. Ferris, B. Reisberg, R. T. Banus and M. K. Schneck. Clinical response to choline plus piracetam in senile dementia: Relation to red-cell choline levels. New Engl. … Continue reading[13] Giurgea, C. P/racetam: Nootropic pharmacology of neurointegrative activity. Curr. devs Psychopharmac. 3: 221-273, 1976., enable the central nervous system to function more effectively under hypoxic conditions[14]Nickolson, V. J. and O. L. Wolthuis. Effect of the acquisition-enhancing drug piracetam on rat cerebral energy metabolism: Comparison with naftidrofuryl and methamphetamine. Biochem. Pharmac. 25: … Continue reading, to enhance intercerebral neuronal activity[15]Buresova, D. and J. Bures. Mechanisms of interhemispheric transfer of visual information in rats. Acta Neurobiol. exp. 33: 673–688, 1973. [16]Giurgea, C. P/racetam: Nootropic pharmacology of neurointegrative activity. Curr. devs Psychopharmac. 3: 221-273, 1976., and to cause the brain to utilize more acetylcholine[17] Wurtman, R. J., S. G. Magil and D. K. Reinstein. Piracetam diminishes hippocampal acetylcholine levels in rats. Life Sci. 28: 1091-1093, 1981.. This led the scientists to select piracetam as the most logical choice to use it in combination with choline. In the Nootroo Gold and Silver formulas, as our nootropic agent, we chose the more powerful and advanced forms of piracetam (Noopept/Phenylpiracetam), and we use the patented form of CDP-Choline(Cognizin) as a choline source.

Studies in adults have shown that CDP-Choline alone will improve verbal memory in healthy adult women[18]“Improved Attentional Performance Following Citicoline Administration in Healthy Adult Women” written by Erin McGlade, Allison Locatelli, Julia Hardy, Toshikazu Kamiya, Masahiko Morita, … Continue reading, and studies in healthy college students showed that piracetam alone increased verbal learning scores as well[19]Dimond, S.J. & Brouwers, E.Y.M. Psychopharmacology (1976) 49: 307. https://doi.org/10.1007/BF00426834. We know that they work well individually, but there is truly some synergistic benefit when they are combined. In this experiment, aged-rats were tested on whether they remembered being shocked a day prior in an experiment. The rats who were on choline alone did not do much better, and the rats on just piracetam did a little bit better, but the rats on piracetam+choline had “much more robust” results. See column all the way on the right in the graph below! 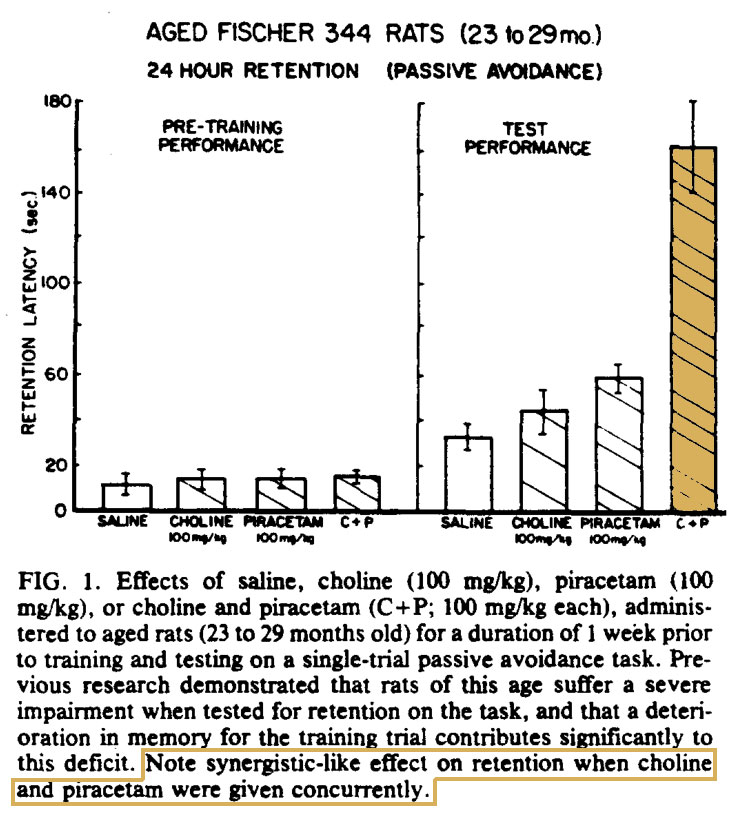 After the first experiment showed such greats results, the scientists decided to follow up on it. They wanted to know if the improvement under choline+piracetam was due to the additive effects of the two treatments or from some other sort of synergy. They also wanted to see the differences between acute (30 minutes prior to experiment) treatment vs longer-term (one-week) treatment, as well as long-term combined with acute treatment.

The scientists found that the true benefits of piracetam+choline are achieved from longer-term (chronic) treatment, with an immediate re-dosing (acute). This shows that there are combined longer-term and immediate effects at play in enhancing memory retention. They also found that even doubling the dose of either choline or piracetam alone for the long-term, even with short-term re-dosing, was still less effective than the longer-term dosing of the combination. This lead the scientists to conclude that the longer the combination was administered the greater the effect. They also found that the clear superiority of the combination supports their hypothesis, that especially in older subjects, it may be necessary to counteract deficient pathways in the brain in order achieve results on improving memory function. 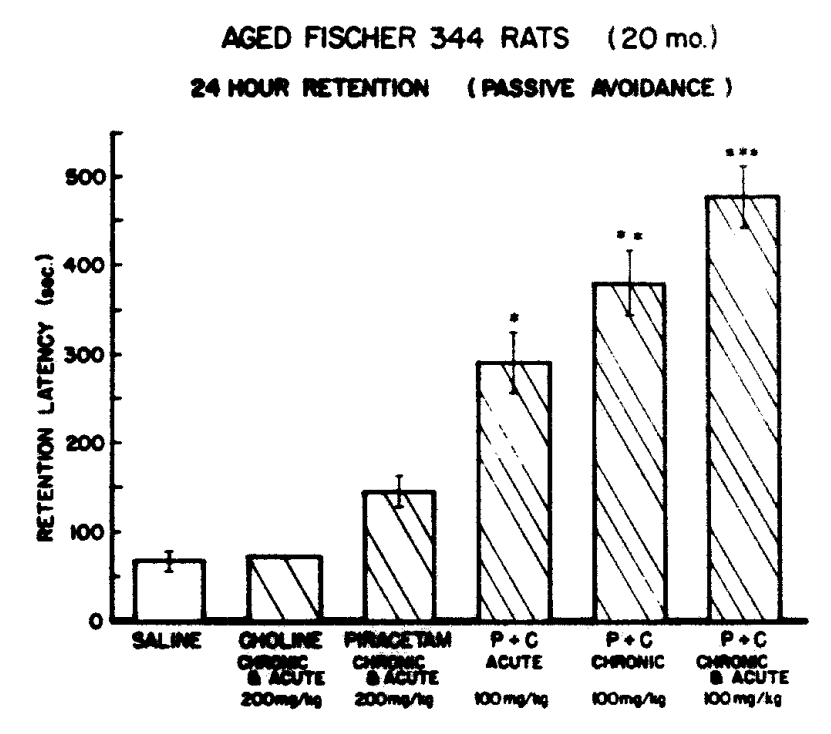 The scientists theorize that one effect of piracetam is to reverse the age-related deficit in hippocampal cholinergic transmissions, by increasing hippocampal neuronal activity and/or acetylcholine release and that it was this activity that played a role in the increased memory observed by the experiment. Another way they theorize they benefit occurs from the combination of piracetam+choline is because piracetam positively affects phospholipid metabolism [20]Woelk, H. Effects of piracetam on the incorporation of a2p into the phospholipids of neurons and glial cells isolated from rabbit cerebral cortex. Pharmakopsychiatrie 12: 251-256, 1979. and choline is important in phospholipid metabolism, which leads to reversing the deficits in post-synaptic receptor mechanisms. The scientist summarize that regardless of the particular neurochemical factors responsible for the behavior improvements observed in the study, it clearly shows that the combination of piracetam and choline are different than that of either alone, and may “represent a phenomenon or principle fundamental to the successful treatment of age-related behavioral dysfunctions” and in that regard, the findings are profound.