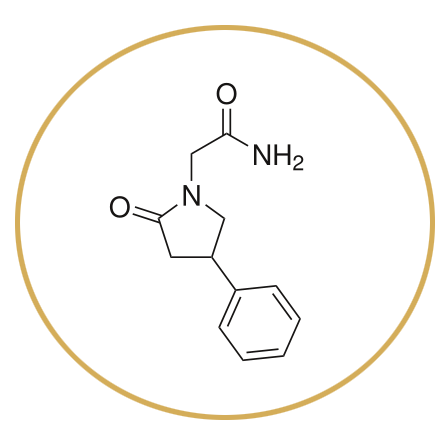 In 2003, the State Pharmacological Committee of Russia approved phenylpiracetam for cerebrovascular deficiency, depression, apathy, attention and memory decline, and has been used in people who develop cognitive deficits and/or depression after encephalopathy and brain injuries. It was shown to increase quality of life in patients with encephalopathy after lesions, brain traumas and gliomas surgery. It resulted in improvements in anxiety and depression, which resulted in less discomfort and better ability to execute everyday activities. [6]Savchenko AIu, Zakharova NS, Stepanov IN. The phenotropil treatment of the consequences of brain organic lesions [in Russian]. Zh Nevrol Psikhiatr Im S S Korsa- kova 2005; 105 (12): 22-6/ Kalinsky … Continue reading

In a comparative trial for asthenia and chronic fatigue syndrome (CFS), patients were treated with phenylpiracetam (68 people), piracetam (65 people) and placebo (47 people). The scores of a ten-word memory test and attention switching tests for the phenylpiracetam improved relative to those of piracetam and placebo. Overall, 83% of asthenic and 87% of CFS patients responded well to phenylpiracetam versus 48% and 55%, respectively, to piracetam. [7]Akhapkina VI, Fedin AI, Avedisova AS, et al. Efficacy of Phenotropil for treatment of asthenic and chronic fatigue syndromes [in Russian]. Nervnye Bolezni 2004; 3: 28-32 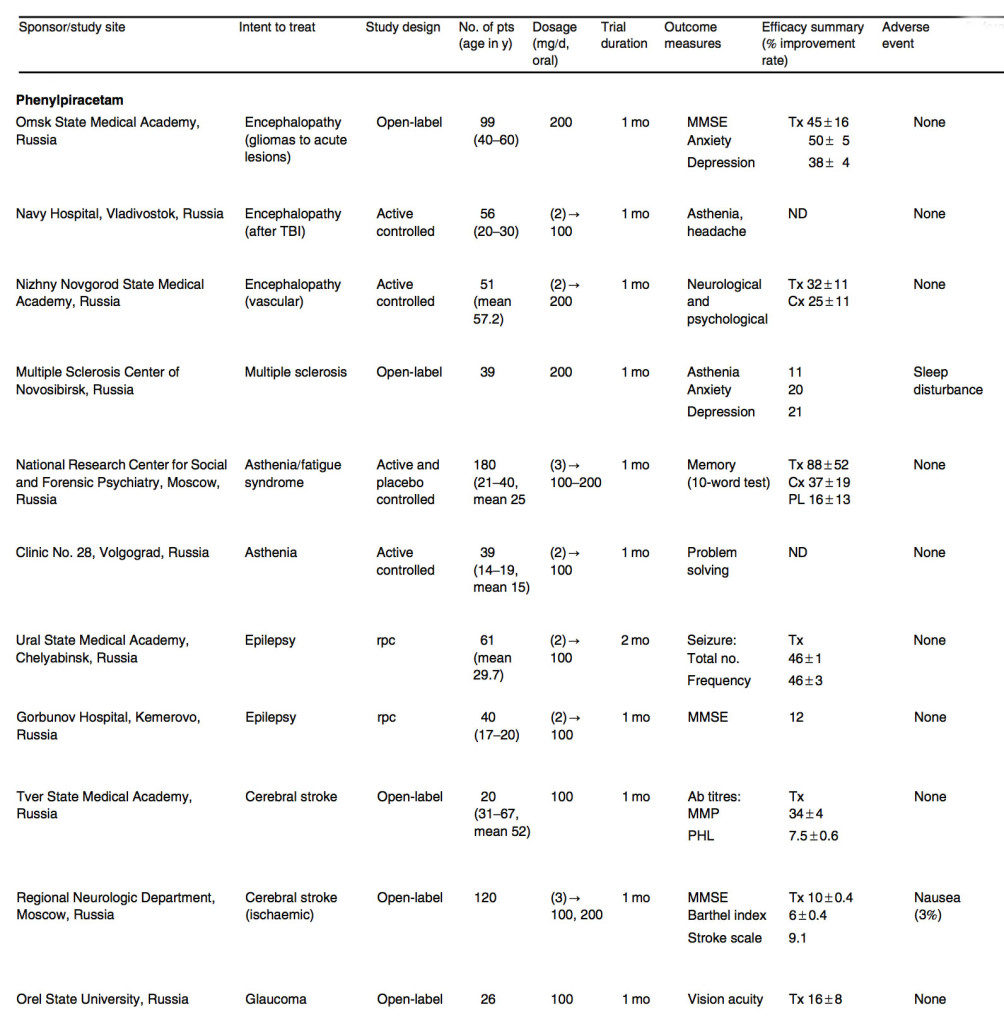 Phenylpiracetam was administered to patients in addition to one standard AED (including valproyl amide, carbamazepine, lamotrigine, topiramate or a barbiturate, or structured polytherapy with more than one of these drugs). It substantially mitigated the number and frequency of seizures of patients receiving AED only and the number of individuals with a desynchronous EEG profile decreased from eight to three, while the number of individuals with seizure remissions increased modestly. [9]Bel’skaia GN, Ponomareva IV, Lukashevich IG, et al. Complex treatment of epilepsy with phenotropil [in Rus- sian]. Zh Nevrol Psikhiatr Im S S Korsakova 2007; 107 (8): 40-3

Consistent with this, cognitive functions in epileptic patients based on an MMSE test improved to only a small extent. [10]Lybzikova GN, Iaglova ZhS, Kharlamova IuS. The effi- cacy of phenotropil in the complex treatment of epilepsy [in Russian]. Zh Nevrol Psikhiatr Im S S Korsakova 2008; 108 (2): 69-70.

Because the immune system has a crucial role in the pathogenesis of ischemia-stroke, titres of antibodies against the main myelin protein and phospholipids were measured in patients with acute cerebral stroke treated with phenylpiracetam. The titres of both antibodies decreased, suggesting possible reduction of ongoing demyelination [11]Gerasimova MM, Chichanovskaia LV, Slezkina LA. The clinical and immunological aspects of the effects of phenotropil on consequences of stroke [in Russian]. Zh Nevrol Psikhiatr Im S S Korsakova 2005; … Continue reading (table V). In a two-arm parallel trial with patients receiving one tablet (80 people) and two tablets (40 people) a day, both MMSE and severity of stroke scores improved significantly, while only showing a trend toward improvement in daily living activities (Barthel test). [12]Bagir LV, Batysheva TT, Boiko AN, et al. Use of phenotropil for early treatment of patients after stroke [in Russian]. Concilium Medicum 2006; 8 (8): 96-101

The cause of blindness in glaucoma is optical nephropathy and ganglia cell apoptosis. Use of a neuroprotective agent in delaying or preventing ganglial cell death was the rationale of a recent trial. Phenylpiracetam was given to patients with unstable open-angle glaucomas after the eye pressures were normalized using ocular hypotensive therapy and laser trabeculoplasty. The average number of blind spots or islands of loss or impairment of visual acuity decreased, and glaucoma stabilized in 80% of patients at 6-month follow-up [13]Basinskii SN, Basinskii AS. Neuroprotective effect of Fenotropil in unstabilized primary glaucoma [in Russian]. Russkii Med Zh 2007; 8 (4): 148-51 (table V). It is premature to conclude whether the trial favors phenylpiracetam because of the lack of a prospective placebo control and possible variables such as patient heterogeneity at the trial entry point.

Oral phenylpiracetam is absorbed by the body quickly and at a high-level. Levels peak in blood plasma between 1-1.5 hours. It’s distribution volume is high, which indicates that there is a widespread intracell distribution of the molecule in the brain. It is slowly eliminated from the body (3.69-4.64 hours), which means the molecule is able to be reabsorbed into the blood in kidney tublues. It does not undergo any modification (metabolism) inside the body is essentially eliminated 100% intact, with 40% in urine, 60% in bile and sweat).