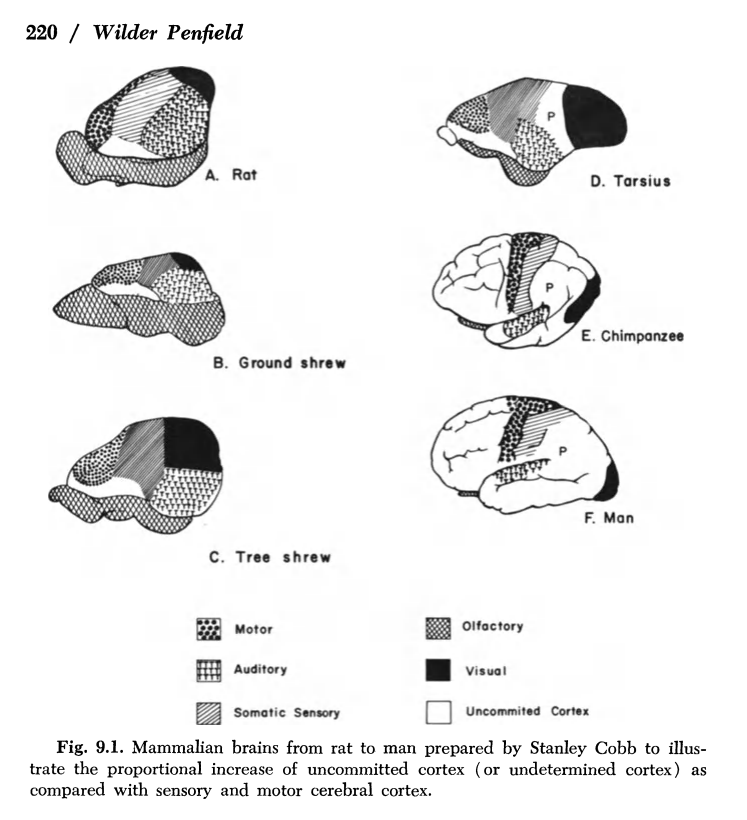 This is an excerpt from Wilder Penfield that forms the basis of Corneliu Giurgea’s quote on humans not waiting for evolution (and is also the source of the idea of the “uncommitted cortex.”):

“Man is different from lower mammals. He has a language that is spoken and written, and he is therefore part of an evolving society. He has in his brain more extensive areas of undefined and uncommitted cerebral cortex. The connections of the uncommitted cortex that will function are determined only during childhood. To this extent, one might well say that the brain of man is molded by his mind. At any rate, brain organization alters according to the content of the stream of consciousness early in life. The brain is subject to alteration by the teaching that comes to a child and the personal effort that he makes.

Man has no need to wait for a bigger, better brain to come to him by means of the slow process of evolution. How slow the process is, was pointed out by Teilhard de Chardin, when he claimed there had been no measurable change in man’s brain since the Ice (Pleistocene) Age, although evolution has ‘overflowed its anatomical modalities.’  Evolution of civilized society has been brief, but it is swift and brilliant. This achievement of the mind was made possible when men learned by teaching to mold the human brain. But there is something else that is continuously creative in our society. Men’s thoughts live on and go on breeding other thoughts-beliefs, faiths, slogans, propagandas.”